Archive for the ‘News’ Category

‘Like 9/11 All Over Again’: Canadians Grow Fearful of Crossing the Border 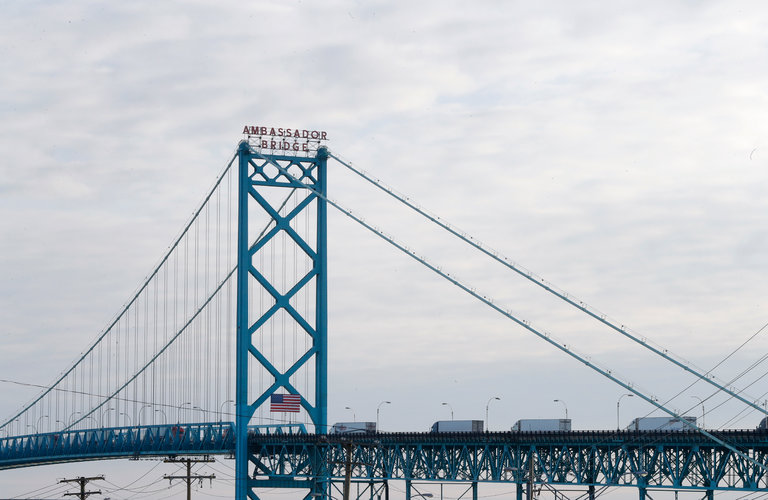 TORONTO — From Windsor, Ontario, it’s just a 10-minute drive over the Ambassador Bridge or through the Detroit-Windsor Tunnel to downtown Detroit. People cross all the time to work, shop, visit a gallery, go to a show or a game. Taxis regularly make the trip, and there’s even a Windsor city bus route through the tunnel.

But President Trump’s policies about who will be allowed to cross the border have Canadians so worried that school officials in and around Windsor have decided to suspend all student field trips to the American side.

“It was the prudent thing to do because there is so much confusion and uncertainty,” said Scott Scantlebury, spokesman for the Greater Essex County District School Board, which represents 35,000 students, many of them immigrants or the children of immigrants. “We don’t want to have some student turned back at the border, or even held up for a period of time.”

Posted in News | No Comments »

Canada’s Ambassador to the U.S. David MacNaughton responded to questions about the progress of the Gordie Howe
International Bridge project while he was in Detroit today.

MacNaughton is only 10 months on the job, but the who’s who of Windsor and Detroit’s business and political circles found out today where many of his priorities lie, including the bridge.

“This is the biggest single infrastructure project in Canada. It is extremely important to us,” says MacNaughton.

He says has been active on the file since taking office. He even visited the early works site in Windsor this morning.

Posted on: May 5th, 2014 by Board of Directors
The Detroit Regional Chamber hosted U.S. Department of Homeland Security Secretary Jeh Johnson and U.S. Representative Gary Peters (D-Bloomfield Twp.) today, in addition to other high-ranking officials and key stakeholders, for a roundtable to discuss the prioritization of the proposed customs plazas at high-volume trade crossings, such as the Detroit-Windsor border and Port Huron. Congressman Peters invited Secretary Johnson to visit the northern border and join local leaders to discuss the importance of the border and the New International Trade Crossing (NITC). Chamber President and CEO Sandy Baruah joined Secretary Johnson and Congressman Peters in welcoming the roundtable which included: Senator Debbie Stabenow, Congressmen John Conyers Jr. (D-Detroit) and John Dingell (D-Dearborn), Commissioner of U.S. Customs and Border Protection Gil Kerlikowske, Detroit City Council President Brenda Jones, Councilwoman Saunteel Jenkins, Michigan Department of Transportation Director Kirk Steudle, Consul General Douglas George, Consulate General of Canada in Detroit, and Mark High CUSBA Canada U.S. Business Association. CUSBA – Canada U.S. Business Association, President – Mark High “Thank you, Congressman Peters. It is a great honor for the Canada-US Business Association to be included in this event. Welcome, Commissioner Kerlikowske (Customs & Border Protection). Secretary Johnson, not that long ago, it would have seemed a bit odd to those of us in this area that we would even have to consider building an “international” region. Until rather recently, most Windsorites and Detroiters would refer to crossing the Detroit River in much the same way that other people talk about crossing a county line. For years, we routinely travelled across the river for meals, shopping, cultural, and sporting events, on nothing more than an Un-enhanced driver’s license. There was nothing “international” about it, except for maybe the funny currency. That all changed, of course, on September 11. The “thickening of the border” quickly occurred thereafter, and it both reminded us that there really is a border here, and fundamentally changed the way we live and conduct business in our region. What didn’t change, however, was the need for businesses and people to connect and interact across the border. You will hear lots of statistics during your visit, and I will resist the urge to pile on. However, there are two that I will highlight. First, the U.S. and Canada have the world’s largest two-way trade relationship, with the value of goods and services between the two countries totalling over $740 billion in 2012. That is over $2 billion a day! And, second, almost half of that US-Canada trade crosses the Michigan-Ontario frontier, either at Sarnia-Port Huron, or Windsor-Detroit. A billion dollars a day, right here. These geographic and business facts translate into both opportunity and responsibility. We cannot take this for granted. And it is our responsibility to make sure the infrastructure is in place to let this trading relationship flourish – next year, 10 years from now, 20 years from now. This won’t happen without our taking positive actions today. CUSBA members from many industries count on cross-border access. In fact, the first event for the revitalized CUSBA 18 months ago was Gov. Snyder and then-Consul General Norton talking about the need for the New International Trade Crossing. We certainly know the auto industry is affected by this – you will hear from our good Dickinson Wright clients Ford and Magna on this aspect. But, at CUSBA, we know it is much broader than just autos. Farmers and other agri-businesses from both Leamington, Ontario, and the Thumb area in Michigan are affected. There is a burgeoning trade in the medical area, with hospitals in Windsor and Detroit beginning to collaborate and coordinate facilities and services – very big business. Banking is now cross-border, with Chase/PNC/Comerica, and others having Toronto and Windsor offices. Tourism in both countries is funnelled through this area – with Mid-westerners headed up to see Shakespeare at Stratford, wineries and birding around Pelee Island, the Shaw Festival and wineries at Niagara-on-the-Lake, my daughters’ high school field trips to the Pinery Provincial Park, plus big city Toronto and beyond. Coming the other way, I see Ontario license plates certainly in northern Michigan, but also on cars and campers headed towards Chicago, Cedar Point in Ohio, the Kentucky Derby, the Indy 500, and the Tennessee mountains. Really, this region is the linchpin to all of North America, and beyond. Goods coming through Detroit jump right onto Interstate 75; and Port Huron is the origination point for the I-69 Corridor. These lead directly to the Southeastern and Southwestern US. Going the other way, this area is the gateway to the big Canadian ports – especially the expanded port at Halifax. These provide direct links to our trading partners in Europe and Asia. Plus just the day-to-day relationships – the Windsor office workers headed to Troy or Auburn Hills; the nurses and other medical professionals traveling to Henry Ford or Beaumont or St. Johns; the law students attending the joint degree program offered by the University of Windsor and the University of Detroit. We used to do lunch across the river – maybe we can again sometime. And if you have any doubts about the vibrancy of our cross border connections, you can just attend a Detroit Red Wings game when the Toronto Maple Leafs or Montreal Canadians are in town – there’s Vibrancy in Action! All these activities rely on structurally sound and efficient crossings at Sarnia-Port Huron and Windsor-Detroit. Canada is certainly offering to do its part, and more. It is up to us to ensure the US-Canadian trading relationship can endure. Mr. Secretary, I thank you for taking the time to come see this situation for yourself, and for letting me speak for our group.” Mark High, President CUSBA – Canada US Business Association, May 2, 2014
Posted in News | No Comments »

Posted on: April 21st, 2014 by Board of Directors
Detroit. The First Quarter of 2014 has been a busy timeframe for CUSBA – Canada U.S. Business Association and our Board of Directors as we have been working on our own events and cooperating with other key North American organizations involved in Canada and U.S. Business Relations development. Our partnerships are focused on bringing Strategic, Unique and Rich Conference and Seminar Content to our CUSBA Members and CUSBA Followers. Some of our own Key Events and those of our Strategic Partners for May and June 2014 include: SEE THE CUSBA Website Event Page for full details and registration information for any of these events at: – https://www.cusbaonline.com/events CUSBA – Canada U.S. Business Association is proud to work with many of the host organizations to provide the key facts and data through unique events and networking opportunities for our CUSBA Members and our U.S. and Canadian Business partners to help all of us move forward in an ever changing world. Remember CUSBA Membership brings unique advantages to our Individual, Non-Profit and Corporate Members with early event notice, special Member Only Pricing, Special Members Only Pre-Post Event Sessions and Special Pricing with some of our Event Partner organizations. – For information on CUSBA Membership see: https://www.cusbaonline.com/members We are looking forward this Spring – Summer to hosting you at one of our CUSBA – Signature Events or meeting you at one of our Key Partner Events. Regards, CUSBA Board of Directors
Posted in News | No Comments »

AND THE CUSBA POWER PLAY FOR MEMBERSHIP “WINNERS ” ARE…

Posted on: March 20th, 2014 by Board of Directors
AND THE CUSBA POWER PLAY FOR MEMBERSHIP “WINNERS ” ARE: • Detroit Regional Chamber of Commerce and • The Odette School of Business at University of Windsor Thanks to all of our Corporate, Non-Profit and Individual Members who renewed their 2014 Membership with CUSBA in our POWER PLAY FOR MEMBERSHIP contest. Our two CUSBA MEMBER winners were the Detroit Regional Chamber and the Odette School of Business at University of Windsor. Representatives from both organizations enjoyed sixth row upper bowl seats for the Detroit Red Wings – Toronto Maple Leafs game on Tuesday, March 18 at the Joe Louis Auditorium. It was an exciting match with the Detroit Red Wings wining 3 to 2 for the Toronto Maple Leafs. Gustav Nyquist had two goals and Jimmy Howard made 31 saves to help the Detroit Red Wings hold on to beat the Toronto Maple Leafs.Jake Gardiner scored on a power play midway through the third period to pull Toronto within a goal.The Maple Leafs appeared to tie the game less than two minutes later, but Nazem Kardri’s goal was waved off because he made a kicking motion to knock the puck in with the inside of his right skate.The Red Wings seemed to seal the win with 2:33 left when Daniel Alfredsson’s wrist shot from the slot hit the back of the net. Toronto, though, pulled its goaltender to add an extra skater seconds later and James van Riemsdyk scored with 1:13 left. • The Tickets for this special drawing were generously donated by CUSBA Board member Kevin Johns, a partner at the accounting firm Clayton & McKervey in Southfield. Our POWER PLAY FOR MEMBERSHIP was developed to Encourage companies and organizations doing business on either or both sides of the border to join CUSBA. Mark R. High, attorney at Dickinson Wright and CUSBA Board President. “Our mission is to help cross-border businesses prosper by providing resources, connections, and education to our members and the Canada/U.S. business community.Already in 2014, members have heard informative economic forecasts for both countries and received VIP invitations to the bittersweet reception March 6 honoring Canadian Consul General Roy Norton, who is leaving his Detroit post for Chicago. Roy’s stellar leadership has truly strengthened our region and made possible the planned international trade crossing.” As a CUSBA MEMBER (Corporate $ 500, Non-Profit $300 or Individual $ 100) you receive special advance notice of CUSBA EVENTS as well as MEMBER DISCOUNTS and you or your organization are listed on our MEMBERSHIP PAGE at www.cusbaonline.com CUSBA has additional events and special programs being planned for 2014 and one of our key focus items is to support the growing trend of ON – SHORING manufacturing in Canada and the U.S. for which we have launched a NEW LINKED IN SUB-GROUP called CUSBA On-Shoring to capture North American and international news about On-Shoring. We would like to thank all of our CUSBA MEMBERS as well as our NEW CUSBA MEMBERS for RENEWING YOUR MEMBERSHIPS and we look forward to hosting you at our next CUSBA EVENT scheduled for Tuesday May 6, 2014 in Detroit. Regards CUSBA BOARD OF DIRECTORS
Posted in News | No Comments »